A workshop entiteld "The role of women in the Earth Sciences - Experience sharing and future prospects" was organized ISPRA and by the Ordine dei Geologi del Lazio (Regional Register of Geologists of Latium) on the 30th October in Rome (Italy). This special event, the first in Italy dedicated to women and Geosciences, aims to enhance the contribution offered by women to Earth Sciences. The organizing commitee was composed by four motivated earth scientists Rita Maria Pichezzi, Silvia Brini and Letizia Vita from ISPRA and Marina Fabri from the Ordine dei Geologi del Lazio.

More than 100 participants, coming from universities, research institues, geological surveys, agencies, professional bodies, associations, policy makers, attend that event. The worshop, organized under the patronage of Consiglio Nationale dei Geologi, the EuroGeoServeys, the European Federation of Geologists, Federazione Italiana di Scienze della Terra and the Geologiocal Society of Italy, was also attend by the African Association of Women in Geosciences represented by its president Prof. Ezzoura Errami and the European Federation of Geologists represented by its executive director Isabel Fernadez Fuentes. YES network was represented via skype conference by Amel Barich. 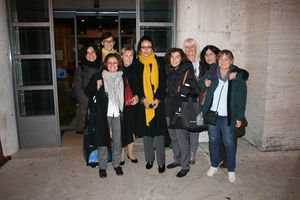 E
Ezzoura Errami
31/10/2012 23:44
I was really impressed by the number of participants. Italian Men and Women were present at that special event to fight together against all the form of discrimination. Congratulations for the good<br /> work and special thanks to my hosts during that Event Rita Maria, her husband Giuseppe and their two children Maria Fausta and Luigi.
Répondre